NMB4.0: Integrated Nuclear Fuel Cycle Simulator has been developed and is now available free of charge!
-Building a platform for the development strategy of the advanced energy system-

A research group of assistant professor Masahiko Nakase, Tomohiro Okamura (Ph.D. student), and Professor Kenji Takeshita of the Laboratory for Zero-Carbon Energy (ZC Laboratory), Institute for Science and Technology, Tokyo Institute of Technology, in collaboration with a research group led by Dr. Kenji Nishihara of the Japan Atomic Energy Agency (JAEA), has developed a simulation code to analyze future nuclear energy scenarios and released free of charge on the ZC Laboratory's website.

For Japan's future energy strategy, it is necessary to quantitatively evaluate the pros and cons of each power source. In particular, for the use of nuclear energy, in order to determine what type of reactor and nuclear fuel cycle should be developed and used in the future, it is necessary to make future projections and estimate the amounts of resources, plant size, nuclear fuel cycle size, and waste generation that will be required. So far, no simulation code for future projections has been made publicly available in Japan. Therefore, ZC Laboratory and JAEA decided to release NMB4.0 free of charge, which has a fast calculation algorithm, includes various reactor types and fuel cycle processes (fuel fabrication, reprocessing, disposal, etc.), and can be flexibly combined and parameterized so that many scenarios can be analyzed. The aim is to utilize this release as an opportunity to recruit a wide range of users and developers, to make it a standard simulator in Japan and abroad, and to make it a research platform for enhancing evaluation functions such as economic efficiency and environmental impact, and for realizing evaluation research across the energy field, including other power sources.

Currently, Japan is developing various reactor types (fast reactors, light water reactors, small reactors, etc.) for future nuclear power applications, as well as reprocessing technologies to reduce the waste burden. In order to actually implement these advanced technologies in society, multifaceted analysis of how they can contribute to the future use of nuclear energy, including economic efficiency, risk, and feasibility, is necessary. The method of quantifying and visualizing future scenarios assuming the introduction of various technologies is called "nuclear fuel cycle simulation”, and the code required for this is called a nuclear fuel cycle simulation code[Term 3].

To date, there are no publicly available general-purpose simulation codes in Japan, and many excellent codes abroad are not open to the public. However, in order to intercompare various future technologies as described above, in-depth research through analysis using common scenarios and code is indispensable, and the fact that such code is not open to the public is a major obstacle. Based on an awareness of these issues, the ZC Laboratory and JAEA aimed to develop a fast, general-purpose, and flexible code and make it publicly available. 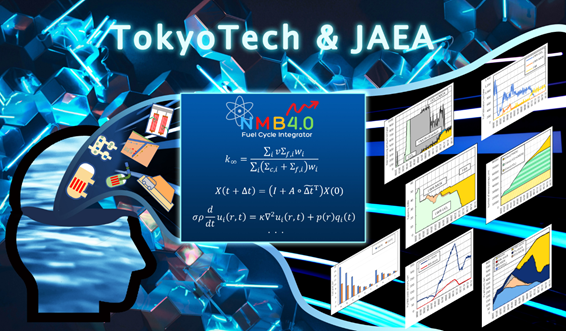 Conventional nuclear fuel cycle simulation codes have mostly analyzed the flow of about 20 to 30 types of nuclear materials such as uranium and plutonium. On the other hand, the current analytical needs for nuclear fuel cycle simulation require accurate evaluation of the generation and disposal of radioactive waste, which requires analysis of about 150 types of fission products produced by the fission reaction. Conventional codes do not track those fission products from the viewpoint of computational cost. On the other hand, the NMB code has succeeded in developing a solution method (OEM; Okamura explicit method) that solves the burnup equation with high speed and sufficient accuracy to analyze the burnup changes of many kinds of materials in a nuclear reactor, thus making it possible to analyze fission products. In addition, the NMB code can now perform analyses in a few minutes, instead of several hours with the conventional method, thereby increasing the variety of scenarios that can be analyzed.

The NMB code can analyze almost all processes involved in nuclear power generation (Figure 1). As for nuclear reactors, the database has been developed to allow the analysis of the modern mainstay light water reactors as well as future-type reactors such as sodium fast reactors, gas reactors, and accelerator-driven systems. For the nuclear fuel cycle, we developed a substantial analytical model and database for geological disposal of radioactive waste, which is not often treated in other simulation codes from the viewpoint of the computational burden. The NMB code is equipped with a database that can evaluate the temperature rise in a repository for many repository designs being considered in Japan, enabling the evaluation of realistic repository sizes.

The future of nuclear energy use in Japan is very uncertain due to uncertainties in the replacement of light water reactors, delays in the development of fast reactors, and difficulties in selecting a geological disposal site. For example, the national government's Basic Energy Plan does not clearly indicate how nuclear power will be used in 2050. Therefore, the code was designed to allow the analysis of various scenarios, such as withdrawal or continuation of nuclear power use and changes in the timing of fast reactor introduction. Furthermore, in order to be able to respond to various situations, the parameters are not fixed, but rather are described by model equations. For example, the amount of plutonium contained in new fuel for fast reactors varies greatly depending on the source of plutonium, but model equations were incorporated to allow for reasonable determination. Also, the amount of radioactive material that can be included in the vitrification of radioactive waste depends on the composition of the radioactive waste, but model equations have been developed to allow a reasonable evaluation. These innovations allow for flexible analysis of many future scenarios.

As described above, we have developed a fast, versatile, and flexible nuclear fuel cycle simulation code NMB4.0, and decided to release it free of charge from the website of ZC Laboratory (https://nmb-code.jp) so that it can become a standard code in Japan and abroad. 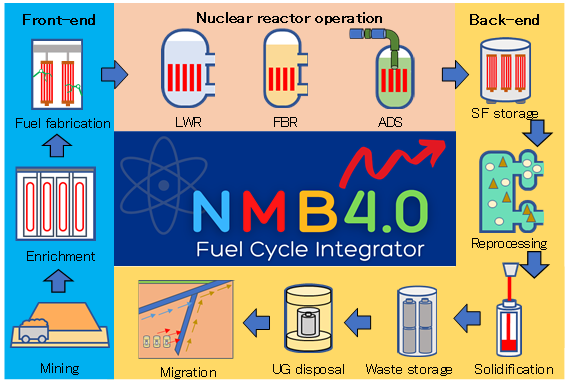 The release of this information to the public will be utilized as an opportunity to recruit a wide range of users and developers. The users are expected to be universities, research institutes, manufacturers, electric utilities, etc., and we hope that NMB cod will help them to develop R&D and implementation strategies for future nuclear reactors and nuclear fuel cycle technologies for the sustainable use of nuclear energy. In addition, since the development of nuclear fuel cycle simulation codes in Japan has been conducted independently by small research groups, we will gather the efforts of many developers to improve the code to a superior one (Figure 2 shows the current development members). Furthermore, we will continue to develop the code to fulfill the role of a research platform for the realization of evaluation research across energy fields, including other power sources, as well as the enhancement of evaluation functions such as economic efficiency and environmental impact. 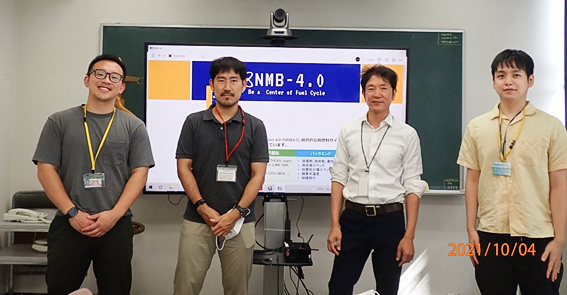 [Term 1] NMB code：
The fast reactor which produces fissile material and causes fission chain reaction in the core using natural uranium or depleted uranium, whose content of fissile is smaller than that of natural uranium, as the fuel.